When the Scottish actor Brian Cox portrayed Hannibal Lecter in Manhunt he based his performance on a study of Peter Manuel. 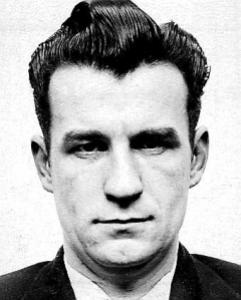 Many unusual  people have walked on Blackpool’s Promenade including serial killers.  Myra Hindley, George Joseph Smith the Brides in the Bath Murderer and Scotland’s Peter Manuel. It is tempting to speculate about murderers.  What makes them different?  We imagine that they have greater powers, more insight, higher intelligence.  And there is a streak in many of us that admires the person who breaks the rules… Satan, Robin Hood, the Kray Twins…  The rules as we receive them are arbitrary, we did not make them and nobody consulted us.  When God told Adam and Eve not to eat the forbidden fruit, in the Bible it does not say it was an apple, it could have been a banana, He did not explain his reasons. Many murderers  have a belief in their own uniqueness and cleverness.  This makes it difficult for them to socialise.  People tend not to be charmed by people who not only believe they are cleverer than everybody else but are uninhibited about expressing this belief.   Many serial killers are clever and socially isolated. Take Peter Manuel.  At the time of his execution he was thirty-one on National Assistance and living with his parents.  He had not got a girl friend.

And yet he had previously been flown to London by the American Government to discuss secret conspiracies against the US government.

He was well-groomed, and strong.  He was five foot four with a tiny chest measurement.  He killed many times. He longed to belong to the world of gangs but he was rejected because he couldn’t keep his mouth shut. There is a hint that he was bullied when he was young.  He was a loyal son and confessed when the investigators put pressure on his family.  He slipped back to a house he had broken into to feed the family cat.  He killed at least  eight people.  One of the delights about studying crime is that we are trying to understand other people and other peoples’ minds are the strangest things the universe has to offer.

Peter Manuel was born in Manhattan in 1927.  The Depression eventually drove his parents back to Scotland in 1932. Peter was a clever lad but always at odds with authority.  From his earliest years he sought to be the centre of attention.  His father Samuel and his mother moved to England is search of work.  His father and mother shine out as being loyal and supportive towards their wayward son. Peter took to housebreaking and served time in Borstal. In 1945 Peter moved to Blackpool.  Blackpool offered casual work, plenty of opportunities for the unprincipled, accommodation and a tolerant attitude to working visitors.  He sometimes slept on the beach and drifted from job to job.  He worked in amusement arcades and as a street photographer.  He was on the fringes of the Blackpool Underworld, the promenade girls and the illegal gamblers. He showed off, smoking cigars and drinking brandy.  He once appeared with a gun.  In the end he annoyed everybody  by trying to steal a gang member’s girlfriend.  He was beaten up.  He returned to his parents. Although Peter was intelligent he was  annoying.  He had some knowledge of the law and he used this knowledge to confuse the authorities.  One of his odder characteristics was that when faced with imprisonment his crimes grew wilder and more frequent.  If reasoning was involved he possibly thought that the investigation would take place when he was in prison and therefore not a suspect.  Another explanation is that he was crazy. Faced with a spell in prison he committed a series of sex attacks in 1946.  At the age of nineteen he was charged with rape.  Peter Manuel chose to defend himself.  The court praised his defence but he was found guilty and sentenced to eight years imprisonment in addition to the twelve months he was already serving. In prison he read about the law and gave advice to convicts.  He was released in 1952 and it seemed rehabilitation was a possibility.  His ever supportive father got him a job with the Gas Board.  When released from prison he set out to ingratiate himself with the police, for example he gave information that led to the recapture of two escaped prisoners. In 1954 he met Anna O’Hara and fell in love. It is possible if things had taken a different turn that Peter would have become a good husband and father.  Peter always dressed impeccably and Anna was  attractive.  Nobody seeing Peter would guess his past included imprisonment.  He was polite and not a heavy drinker. Peter and Anne went to dances, listened to the radio, went to the cinema.  In 1955 they got engaged. They argued over religion.  Anna was a Catholic and although Peter’s family were Catholic he had given up.  If he loved Anna why did he not just pretend, it’s not as if he was a model of probity in other matters?  Maybe  he relished the role of outcast.  Peter was always gentle and polite with Anna.

On the day he was to have married he assaulted Mary McLachlan. She knew him slightly although not by name. Although he threatened Mary Maclachlan it is unclear whether he raped her.  There is a suggestion that he gained satisfaction by terrifying his victims. He was allowed to conduct his own defence.  The verdict was: “Not Proven.”  This convinced Peter Manuel that he could get away with anything, that he was simply cleverer than the authorities.  Peter Manuel’s gargantuan self belief accounts for his further actions.  It boosted his already considerable sense of immunity and self-importance.

A seventeen year old girl called Anne Kneilands was murdered on a golf course in East Kilbride on 2 January 1956.  She had been “criminally assaulted”, meaning that there was a sexual element in the crime.

The Watt family lived at 5 Fennsbrook Avenue in Burnside on the South side of Glasgow.  William Watt had gone for a fishing trip and was staying near Lochgiphead ninety miles from his home.  Mrs Marion Watt, her daughter 17 year old Vivienne and her sister Margaret Brown were found shot dead in their home.  Immediately the investigators suspected William Watt.  Their suspicions strengthened when two witnesses identified Mr William Watt driving to his home.  One witness went so far as to identify Mr Watt, his car and his dog.  The investigators employed a driver to demonstrate that Mr Watt could have driven from his hotel, killed his family and returned to his hotel without being missed.  Mr William Watts had no history of violence.  One problem was that the fuel in the car was not compatible with a round trip of nearly two hundred miles.  The investigators theorised that Mr Watt had hidden the fuel on the road and refilled his car.

Mr Watt was charged and spent 67 days in Bairnlinnie Prison.  It is a sobering thought that he could have been hanged on the identification evidence.  It was widely believed that he was guilty.

Eventually Mr Watt was released. Peter Manuel contacted Mr Watt’s solicitor saying that he had information about the murder from his criminal contacts.  What followed defies imagination.  Peter Manuel and William Watt had a series of meetings in which the crime was discussed and Peter Manuel claimed the crime had been committed by criminal acquaintances.

On Sunday 8 December 1957 a taxi driver called Sydney John Dunn shot dead at an isolated spot in County Durham.  He had driven a passenger from Newcastle earlier that morning.  Peter Manuel had been attending an interview at Newcastle.

On the 6 January 1958 the bodies of Peter Smart, Doris Smart and their son Michael aged 10  were found all shot in the head at their home at 38 Sheepburn Road.  They lived within walking distance of where Peter Manuel lived.  The were killed on January 1st.  Somebody had opened and closed the curtains and fed the cat whilst the dead bodies lay in their beds.  Peter Manuel had attended family parties  during this time and he had treated his family and friends.

Eventually missing notes were traced to Peter Manuel and he was arrested and charged.  He was charged with eight murders.  He offered to confess to spare his family pain.

After the beginning of the trial he dismissed his legal representatives and took over his own defence. The charge of murdering Anne Kneilands was dropped because of lack of evidence.   In some respects he conducted his defence with skill.  He revived the original investigators’ idea that William Watt had murdered his family and if this were the only crime he might have caused enough confusion to be acquitted.  He skilfully blended fact and fiction.

It was probably with some gratification that he heard the judge compliment him on his defence which was offset by the fact that he was sentenced to death.  His appeal failed and he was hanged by Harry Allen on 17 September 1958.  When the advocate was presented with evidence that Peter Manuel had an abnormal personality he expressed the view that Peter Manuel was: “Simply a bad man.”

There are unanswered questions.  Did Peter Manuel murder the taxi-driver Sydney Dunn?  The case that he did was that he was in the area at the time.  The case against: why would Peter Manuel murder Sydney Dunn  miles from any means of transport and how did he get away?  Numerous other crimes have been blamed on Peter Manuel.  He was the most dangerous kind of killer, abnormal enough to commit pointless crimes but normal enough not to draw attention to himself.

Peter Manuel is surely the oddest character to have worked in the Golden Mile at Blackpool.  In the theatre of the imagination we  can visualise him serving an ice-cream to the young Myra Hindley.