In April 1916, Woolworths opened their 66th store in Blackpool, on the site of the Royal Market, next to the Royal Hotel and next to Blackpool Tower – a very prominent position.

In 1926 the premises has been expanded as it was a popular store. Day visitors to Blackpool would come straight off the train, cross the road and wander through Woolworths until the pubs opened.

The Royal Hotel continued trading until 1936, and that is when Woolworths took over the whole corner site to create a huge Art Deco mega superstore – the biggest Woolworths ever (at the time).

“In 1936 the construction team planned to demolish the successful branch at the junction of Promenade and Bank Hey Street in Blackpool, a popular seaside resort on the North-West coast of England. It was replaced by a huge store with three large trading floors and two floors of restaurants above. The elaborate design included bright bronzework, marble cream ‘Darwen’ glazed bricks and a landmark clocktower and flagpole. The store was the largest and most modern of 2,000 Woolworth’s across the world when it opened in 1938.

When it opened in the Spring of 1938, the store on the Promenade at Bank Hey Street in Blackpool was Woolworth’s most ambitious building ever. The huge premises dominated the skyline. The icon was visible for miles along the Fylde coast and right out to sea. The resort on England’s North West coast had become the country’s favourite, attracting millions of tourists each year. The site was triangular and opened into three streets. The building was made of glazed, cream bricks with a marble finish. It had bronze window frames with elaborate bright-work. A clocktower added the finishing touch.

There were three salesfloors, each 15,000 square feet (1,400 m2), and two 2,000 seat restaurants on further levels. The upper facility was mainly reserved for private parties, but gave the capacity required for tourists visiting the town during Wakes Weeks when their local industry all closed at once. Woolworth offered main dishes for sixpence (2½p) and a full meal for two shillings (10p) or less.”

The square tower at the top was a ventilation shaft, pumping cool air into the store, and there was a clock and an illuminated ‘Woolworths Cafe’ sign.

Shortly after the store was refurbished with this new fascia, Kingfisher sold the premises and this Woolworths superstore closed. It became a gaudy Pricebusters in the mid-80s, which was rather a shame for such a beautiful buidling. Today, Blackpool day-trippers can come into this building for a drink, as it’s now a Wetherspoons, with a Sports Direct on top. 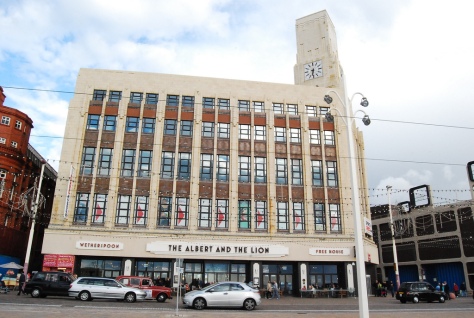