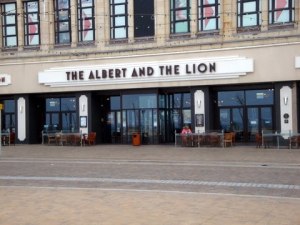 THE ALBERT AND THE LION

The name  came from Stanley Holloway’s monologue about the intrepid  Ramsbottom Family written by Marriott Edgar.  To  summarise Mr and Mrs Ramsbottom and their son Albert visit Blackpool Tower.  Their visit is marred when Albert is eaten by a lion.  Being stoic Northern Folk they are prepared to take this in their stride.  The manager appears and offers

The manager wanted no trouble,

He took out his purse right away,

Saying “How much to settle the matter?”

And Pa said “What do you usually pay

But Mother had turned a bit awkward

When she thought where her Albert had gone.

She said “No! someone’s got to be summonsed”- So that was decided upon.

Then off they went to the P’lice Station, In front of the Magistrate chap;

They told ‘im what happened to Albert, And proved it by showing his cap.

And he said that he hoped the Ramsbottoms Would have further sons to their name.

At that Mother got proper blazing, “And thank you, sir, kindly,” said she.

“What waste all our lives raising children To feed ruddy Lions? Not me!”

INSPIRATIONS FOR THE LION AND ALBERT

There were two events connected with Blackpool and being eaten by lions. In August 1905 William Livesey was eaten by lions. William Livesey worked for the Tower Company and one of his jobs was to help feed the animals who were kept on Lytham Road if they were unwell. For this he had keys. In 1905 were three lions at the Lytham Road Site.  . William Livesey was fond of a drink and he was drinking at the Dunes with his mates. He had been drinking all afternoon and evening and he bought bottles of beer. Possibly he decided to show off by showing all or some of his mates the lions. He let himself into the site almost opposite  the Dunes where the animals were kept and let them into the yard. And then he stumbled and fell and the lions ate him. His mates, terrified of what had happened, ran off and would not admit it in case they got in trouble. All we know is that he was found in the morning and nobody would admit accompanying him to the yard.

THE RECTOR OF STIFFKEY

The Rector of Stiffkey

When the Bishop of Norwich decided that the Rector of Stiffkey ( I am not making this up, we recall that Sigmund Freud visited Blackpool twice) was a nuisance and decided to silence him.  Consequently the Rector of Stiffkey the most famous Anglican Clergyman of all time.  The  Bishop claimed it was because of the Rector going beyond his duties as “The Prostitutes Padre.” It was a frame-up. The real problem was that the Rector sympathized with rural labourers rather than landowners and generally annoyed the establishment. Witnesses were bribed to give evidence against him. If the Bishop of Norwich thought he had solved a troublesome problem he had another think coming. Unusually for a man of the cloth had a successful career as an actor before he became a vicar. He had aristocratic friends and was acquainted with the Royal Family. When he was defrocked he had  an enormous sense of injustice and may have  identified with the central figure of Christianity who was unjustly treated by the authorities. In any case he appeared for four summers on Blackpool’s Golden Mile. Sometimes he would appear in a fridge and sometimes being tortured by the devil and other times he claimed he was on a hunger strike although he did not lose weight

. He was commissioned by Luke Gannon, a character who deserves more study. Blackpool Council unsuccessfully tried to have him removed and he was awarded compensation. After his Blackpool adventures the Rector of Stiffkey appeared in Skegness with two lions. He would deliver a short protest against his treatment and enter a cage with a (usually) docile lion.   He was attacked and died on 30 July 1937. Four thousand people attended his funeral. These  incidents  may  have been the inspiration for Mariott Edgar’s poem the Lion and Albert which he wrote for Stanley Holloway. Blackpool Tower is a national icon . There are other references to Blackpool Tower in Stanley Holloway’s monologues.

Why was King Kong   appropriate to adorn Blackpool Tower? He was created by Edgar Wallace.  Edgar Wallace was a phenomenon.  He came from a very poor background.  He was the adopted illegitimate son of an actress and left school when he was twelve.  Despite this he was utterly self confident.  He served in the Boer War and took up journalism.  Then he wrote thrillers and plays.  He was the first author to come from a working class background.  He was a genial character, wonderfully generous.  He earned millions but he gambled and gave away millions. Edgar Wallace’s works are still in print, but in his lifetime one in four books bought in England were written by him. He could write, or rather dictate, a novel in twenty-four hours. He wrote plays and his work “On the Spot” based on Al Capone was Charles Laughton’s  first success. It has been called the best melodrama of the twentieth century. Edgar Wallace had no literary pretensions. He was the first crime writer to use policemen as opposed to gentlemen as protagonist, he invented the police procedural. His plots were very varied. Amongst other readers were Leon Trotsky, William Butler Yeats and King George V. As a journalist he reported on the trial of George Joseph Smith who drowned one of his brides in Regent Road Blackpool. Edgar Wallace excelled at self-promotion and with his yellow Rolls Royce and his characteristic cigarette holder he was the first celebrity author.. 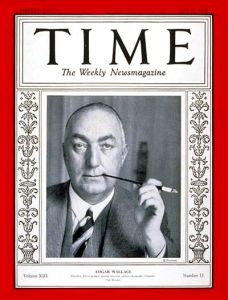 Edgar Wallace on the front of Time Magazine

When Edgar Wallace decided to stand as Liberal  for election in Blackpool in 1931 he took up residence at the Metropole Hotel.  He charmed meetings with his good humour.  And he lost.  Abysmally.  Really abysmally.  It must have been a blow to his towering self-confidence.  But he was not one to be down for long…

He went to Hollywood where he worked on King Kong.

In Hollywood he met Marriot Edgar who wrote: “Albert and the Lion.” Edgar Marriott  later worked on the script of his novel “Sanders of the River” which starred  Paul Robeson.  Incidentally Paul Robeson also visited Blackpool.