THOMAS MCNAUGHTAN
When Thomas McNaughtan died  the family wanted a quiet funeral.  On Monday 20 July 1896 the body was borne by carriage from his home at 3 Queens Square Blackpool to Blackpool Cemetery at Layton at midday while the bells of Christ Church and St Johns pealed.  Following the hearse was a landau laden with tributes.Just about every councillor, senior council employees, the chief constable,  doctors attended.

Thomas McNaughtan  embodied the second generation of Blackpool Council and his era   coincided with Blackpool’s Golden Age.   The Tower, the tram system, current St Johns, the Town Hall, the Winter Gardens, the Grand… were all built between 1860 and 1901.  Blackpool Tower is a symbol of this astonishing enterprise.

The tram system allowed people to live further from the centre and suburbs developed.  So farmers sold agricultural land for building, the tram system had a customer base, builders and their employees benefited and housing needs were met.  The expansion fuelled further expansion.  Councillors were businessman who promoted their interests by promoting the growth of the town.

Dr Thomas McNaughtan was in the thick of it.  He was born in Glasgow.  After a start in business he studied medicine.  He was an outstanding student, won many prizes and was chosen by his professor to demonstrate anatomy to other students.  When he qualified he worked in Cumbria and Bolton.  In April 1873 he married Miss Jane Ann Dickson at Marton Church.  Jane Ann was the daughter of Edward Banks Dixon.  I have not studied the family tree but it is likely that she was a relative of Henry Banks  “the father of Blackpool” , and so connected by marriage to the ruling dynasty of Banks and Cocker and to Blackpool’s first historian William Thornber.

At his  funeral the Rev N S Jeffrey said plaintively that Thomas came to church even when he was ill: “Unfortunately medical men did not come to church in great numbers now. ” He did not know why.

Thomas McNaughtan died on 16 July 1897 on the Steamship Columba out of Glasgow.  He had suffered from heart problems and had seemed to have been recovering.  He always found that a holiday in Scotland restored his health.  When Blackpool was incorporated in 1876 he was one of the first aldermen (for Claremont) until 1892.  He was twice mayor in 1879  and 1880.  He became a  magistrate in 1887.  In addition to his medical practice he was involved in many local businesses such as the Metropole.   He was photographed laying the first tram track.

He lived in Queens Square….  the most prestigious address in Blackpool.   Prostitutes carried on their profession in Back Queen Street.  The Convent of the Holy Child Jesus, which became Layton Hill Convent had been in Queens Square.  In more modern times Fred Sewell and his gang fled to an escape vehicle in Queens Square after the robbery initiating a fatal car chase.

Nobody mentions that his half-brother Daniel M’Naghten attempted to assassinate the Prime Minister Robert Peel and   killed Robert Peel’s secretary, Edward Drummond,  (well, probably , come to that later)  and that Daniel was incarcerated in a lunatic asylum and Daniel’s  trial resulted in a change to legal practice.

Daniel M’naghten (this is how it is usually spelled) was the illegitimate son of Daniel M’naghten Senior who was also the father of Thomas McNaughtan.  When Daniel’s mother, Ada, died he lived with his father’s family and was trained as a wood turner in his father’s factory.  Then he worked as an actor for three years and then in 1835 started business in Glasgow as a wood turner. He prospered.  He was sober, frugal and anxious to learn.  He studied politics and taught himself French.  He was a political radical and employed other radicals.

In 1840 he sold his business and stayed in London for two years. He briefly visited France.  In 1842 he returned to Glasgow and attended lectures on anatomy.  He complained to various people including MPs and his father that he was being persecuted by “The Tories.”

On 20 January 1843 Edward Drummond, the secretary of the Prime Minister Robert Peel, was walking towards Downing Street from Charing Cross when Daniel drew a pistol and shot him.  Before Daniel could draw a second pistol he was overpowered.  It is thought that Daniel had intended to kill Robert Peel.    Drummond did not appear to be badly hurt… he walked away… but he died  afterwards.  Probably his death was caused by medical treatment.  The most common medical intervention was bleeding.  That is a vein was opened and blood taken.  This had gone on for two thousand years when a naval statistician demonstrated that it had the effect of shortening life.  It is possible that the overall effect of the medical profession has been to shorten life… that was indisputably the case in 1843.  A contemporary pamphlet by an Army Doctor blamed the death on excessive bleeding.

Daniel’s father took charge of  Daniel’s  legal defence.   The  defence offered evidence that Daniel was suffering from mental problems… what we would call paranoid delusions.  Daniel was convinced that “The Tories” were planning to kill him.  So convincing was the defence case that the persecution declined to proceed.  Daniel was transferred to an asylum.

Queen Victoria was unamused.  She had been a victim of assassination attempts.  As a result of her insistence the House of Lords  examined the case and produced what are called the M’naghten Rules which set the legal test for criminal insanity and which  still apply.

Daniel M’Naghten in 1856, thirteen years after the murder of Edward Drummond

By coincidence Robert Peel was a visitor to Blackpool.  Robert Peel’s  father ‘s father in law (who was also his business partner)  William Yates,  had bought property in Blackpool.  The Yates Estate  is remembered in the name Yates Street and also in General Street.  Yates’s son was a general.  Robert Peel  stayed with  his relatives when he was young.  The Rev William Thornber mentions this.

It is a  well known fact that all assassinations are conspiracies.  Well there are grounds.  Most puzzlingly Daniel had £750.  That is equivalent to £75000.  Lot of money for a woodturner who hadn’t worked for two years?  It is   possible that Daniel was under observation by the early intelligence services.  It was a time of social unrest and the authorities may  have kept tabs on a wealthy radical who employed other radicals and took trips to France.  Finally there was the speed and decisiveness of his legal defence .

More probable is that Daniel was mentally ill.

Did Thomas McNaughtan respected Mayor and pillar of the community know his half-brother Daniel M’naghten assassin?   Daniel was born in 1813 and Thomas in 1834 so there was an age difference.   Daniel and Thomas’s father also confusingly called Daniel made no effort to conceal his illegitimate son, employed him and came to his aid when he was on trial.  Following the death of Edward Drummond, Daniel Senior  intervened decisively on Daniel Junior’s behalf.   Thomas may have met Daniel but they were not closely acquainted.  An interest they shared was anatomy, Daniel attended lectures. 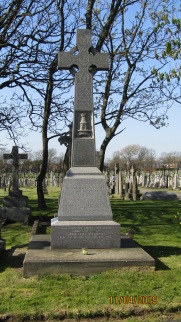 Thomas McNaughtan’s tomb at Layton Cemetery… I was intrigued that there seemed to be a tribute….  a glass containing flowers.

You can visit Thomas McNaughton’s tomb in Layton Cemetery.  I do not know where Daniel is buried possibly an anonymous grave at Broadmoor.