On Wednesday, 3 May 1905 at 1.15 am the bodies of a man and a woman were  were found off Watson Road (at that time it was called Watson’s Lane)  near to Watson Road Bridge.  They were lying on their backs foot to foot eyes open  as if looking at the sky.  Their hats were  placed together.  They had been shot through the mouth with a revolver.  The revolver was near by. 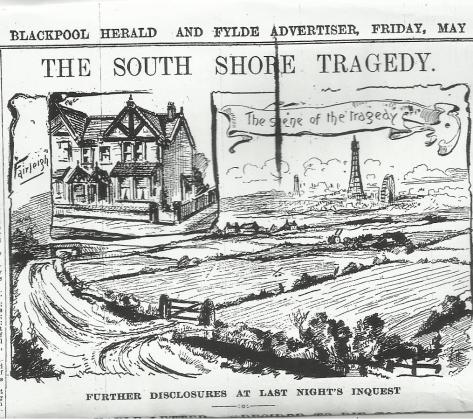 Robert Rushton Shaw was 27 and his wife Elizabeth Shaw was 24.  Robert had inherited many thousands of pounds from his father. He had no need to work.   Elizabeth’s family  were also wealthy.  Elizabeth was from Pennsylvania.    How does a lad from Colne  come to meet a lass from Pennsylvania?   The answer is probably cotton.  Robert’s father was a wealthy mill-owner.  Robert was a cousin of Elizabeth who  had an uncle in Burnley.

There was no mystery about what happened although there is a mystery about why it happened.  Robert had been agitated for weeks.  He had been drinking a lot at the Belle Vue .  He had been married for five years and he and Elizabeth had a boy aged four and a girl about one.  Elizabeth Shaw was strikingly attractive.  The couple had recently moved from living with his mother to living at a house called Fairleigh in Reads Avenue.  His mother lived at 25, St Bedes Avenue.

So a rich man,  in the prime of life with a beautiful wife and two children went into a field and shot her through the mouth.  And then he shot himself.  And there is no doubt that Elizabeth consented.  Go figure.

Robert had been agitated for weeks.  On the day he died he was being followed precisely because his mother feared he would harm himself.  In fact he made many allusions to to suicide.

There was a difficult relationship with Elizabeth.  One time he said he wanted her to go back to the United States.  Another time he wanted to go with her.  Things had become so difficult that she had gone to stay with her uncle in Burnley with the intention of returning to the United States.  Robert had followed her to Burnley and persuaded her to return.  A clue to his habits and state of mind is that he had three brandies for breakfast before he met her in Burnley.

“We have arranged to die together.

We love each other but the differences which have unfortunately come between us are apparently insurmountable. ”

There was an inquest at South King Street.  Inquests were grim businesses in those days.  The jury went to the Police Mortuary where the bodies lay side by side almost as they had done in the field of Watson Road.

The inquest revealed the cause of Robert’s agitation.  To our minds it is somewhat gobsmacking.  His mother asked him why he was agitated: “Mother you know I made a point of marrying a pure girl?” His mother Alice asked if that was not the case: “No she was not a pure girl.  I have found out and I can never be happy again.”

According to Robert he had asked Elizabeth and she had confessed to an indiscretion before she met Robert.  What constitutes and indiscretion in 1900 we can only guess. And this seems to have sent Robert loopy.  He is drinking, he is buying tickets to New York (a receipt is found in his pocket after his death) he is buying a revolver at an ironmongers in Bolton Street.  He is is falling out and making up with Elizabeth.  The drinking and the travel plans and the revolver are all indications of a  wish to change, to escape.

They had resolved to die together.

Elizabeth said to Alice, Robert’s mother: “Now you must be brave for the children’s sake and keep calm.  We are going for a walk around Marton.”  She seemed excited.  And she said to the lady next door that she was leaving.  She cancelled the milk.

Robert’s mother asked a neighbour to follow them.  They went to the Waterloo and then they walked towards Watson Road Bridge along what is now St Annes Road and was then called Middle Lane.  The neighbour went back to ask for more help and two neighbours searched the area around Watson Road Bridge.  Two shots were heard seconds apart and the bodies were found in a field off Watson Road.

The inquest found a verdict of Suicide and Murder.

On Tuesday May 9 1905 Elizabeth and Robert were buried at Layton Cemetery side by side as they had been in the field off Watson Road and in the mortuary at King Street.

A STAB AT AN EXPLANATION

Nothing can really be explained but this is an attempt to understand why Robert Shaw was so agitated at Elizabeth’s “indiscretion.”  Robert Shaw was illegitimate.  He had his father’s name but his mother was called Alice  Rushton.  Presumably Robert was the result of an affair between his mother Alice and his father Mr Shaw, a JP and a cotton magnate.  Mr Shaw, the father, had pre-deceased his son.  Is this the key to Robert’s horror of “impurity?”  Without work and with  few friends, a neighbour said he was only seen alone or with his wife he had nothing to distract him from his thoughts.

And Elizabeth could have lied.  She only died along with Robert because she was truthful.  Across the century we can still feel a kind of pity for the couple lying together in Layton Cemetery.

Many thanks to Blackpool Local and Family History Service for the use of their newspaper archives.