I have gone off topic to write about a crime that happened in Fleetwood in 1947. Fleetwood and Blackpool  are like separate universes.   To a visitor from Blackpool Fleetwood is  industrial wastelands, good architecture with a Regency look, neat terraced houses, a  gloomy  uplifting seascape, mud and water.  Like Blackpool Fleetwood is a town that used to have a reason for existing.  I will write a psychogeography of Fleetwood later so that people who don’t like that kind of thing can avoid it.  But the bottom line is that Fleetwood’s decline is more recent and more catastrophic: there remains a lot of the former Fleetwood… a haunting and stark and doomed beauty.  For my money its the most romantic of the Fylde towns, England’s most beautiful ugly town.  Trawler fishing used to define Fleetwood and trawlermen were tough, hardy, daring.  The job was  well-paid and dangerous.  Deaths at sea or in the docks were everyday events and maybe not all of these deaths were accidental. If a trawler came back with less people then it set off with…  who’s to say? Spells at sea would be followed by explosive scenes in the pubs that lined the docks….    you can imagine.

Fleetwood people in a Marxist kind of way took their values from their trade and were cooperative compared to the insouciant dog eat dog attitude of Blackpool people.  Smuggling was a sideline in the town and people were close-mouthed with the authorities.

What follows is the saddest story.

On Thursday 23 October 1947  Florence Port, aged 10, had tea with her father.  She would not sit down for a meal as her father said but she took what she wanted. She lived at Heathfield Road, Fleetwood.  The houses are modern and well-built.  Then she went to see her married sister Mrs Edith Eagle at Flakefleet Avenue.  On the way she would have passed close to Flakefleet School where she was a pupil.   Her father was a trawlerman but had injured his leg and had been unable to work for seven months.  Her two brothers were at sea on trawlers.  Her mother had died the previous December.  Mr and Mrs Sumner were lodgers at the home, Mrs Sumner helped look after Florence.

Edith took  Florence  home shortly before 9.  Florence played the piano with her playmate Vera Parker.  Then Florence went out to play with some boys that she heard calling.  Mrs Sumner asked Vera to ask Florence to come in for her bath but Florence refused and ran off.  Mr Sumner looked but could not see her. Florence was seen talking to some young boys outside her home.  She was seen   at 9.10 alone at a street corner in Heathfield Road.   The man who saw her said he had often seen her but not alone or so late.

When Mr Port came back with a friend about 10.35 she had still not returned and he searched and then called the Police.  A search followed concentrating on a nearby brook.  In the early morning Mr Port and a neigbour found Florence’s wellington boots and some underclothing in the alley at the back of her house.  These alleys were used for dustbins , one alley would serve several houses.

On Friday the search continued and bloodhounds were brought.  During the day Florence’s body was found concealed  in a piece of wasteland off Fleetwood Road.  She had been interfered with.

A Police investigation revealed that Florence had suffered from asphyxia caused by shock, she suffered from congenital conditions including  an enlarged heart.  It was also found that she had eaten a meat an potato pie or hot pot within two hours of her death.  Since she had not eaten this at home and had no money she must have been given them.    A murder investigation followed.

13 year old George Kay said he was playing when Vera Parker called for Florence to come in but she took no notice.  She went into a back alley.  A man came running out.  He was holding his jacket round his neck and he had bushy hair tumbling down one side of his face.  He was middle-aged.  The same man had told him to “beat it” earlier in the evening, about 8.00pm.

“I think he was a stranger.  I have never seen him before.”

The funeral was conducted by Skipper H A Howes from the Fleetwood Seaman’s Mission and a choir sang “Safe in the arms of Jesus”   A forgotten world where trawler skippers are deeply religious.  Skipper H A Howes had also conducted the service for Florence’s mother.

After the service two thousand local people filed past the grave.

The most detailed account of the events came out at the Inquest when fifteen witnesses spoke.   Florence’s socks were clean.  This means that she had been transported to where her body was found and that she almost certainly died in the alley at the back of her house where her underwear and wellingtons were found.

A picture emerges of Florence.  Her father had described her as “rather backward.”  She was a happy child who sang songs from the radio.  She was unlike many little girls in that she preferred making catapults and bows and arrows and building with bricks.

There is a suggestion that she prefers the company of boys, for example she will not come in on the Thursday evening when when she was killed because she heard boys calling.

The most disconcerting thing said at the inquest comes from Florence’s 25 year old sister Edith Eagle: “when her mother was alive she told her that she had seen Florence standing in a doorway with some boys who were interfering with her.  That was about two years ago.”  When the Coroner asked if Florence had ever confided in her Edith Eagle replied that: “Florence would not have told her anything.”

The Coroner returns to this point with Mrs Sumner, who says she had no suspicions.

This Florence Port goes her own way, lives in her own world. She is tomboyish, preferring catapults and bows and arrows, to dolls.  She is obstinate when she will not come in for her bath.

The verdict of the inquest was that Florence Port had been murdered by person or persons unknown.

It seems so improbable.  The man was already in the alley when Florence walked into it.  But if he was a stranger it is hard to see how he would go up a back alley in the dark to the back of Florence’s house (because of the arrangement of the alleys it is not obvious which entrance will lead to the back of which house)  and Florence coincidentally and for no reason go along the same alley.

Then he  sexually assaulted her.  Then he left the alley.   Then he must have gone back and moved the body without being seen along a ten minute walk to the nearest bit of wasteland in spite of being a stranger. In the dark.

And not be noticed by anybody else before or since.

Still anything can happen.

The Coroner had  in mind the possibility that Florence was “intefered with” by older boys.  We cannot know this.  It may be that there was sexual play on the part of Florence and older boys.  Florence died of asphyxia and shock after being “interfered with.”

So it is possible that Florence went willingly to the back of her own house to engage in sexual play with a bigger boy.  And she died of asphyxia.  There was no evidence that she was deliberately killed.

The problem is this.  Would a thirteen or fourteen year old lad who was accidentally present when a girl died have the presence of mind to move the body alone along a ten minute walk along a fairly busy road?  And could he do it without being seen?  And without help?

What if he asked for help from friends or siblings. I find it hard to credit that a lad, say thirteen, in panic would have the capacity to move a body to the waste ground alone.  How was the body moved?    The alleyway system could be used for almost the whole route which would minimise the possibility of being seen.  The body was left on wasteland opposite Flakefleet Avenue which suggests this was the route.

I think this is the most likely explanation.  It must have happened on a  tight timetable.  Mr Port returned about 10.35 .  Florence was last seen at 9.10.   And the body must have been moved before 10.35.  The reason for moving the body was to delay an investigation and to change the interest of investigators from Heathfield Road. 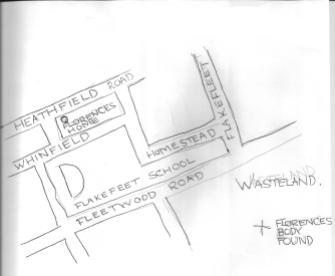 Apologies to cartographers.  This is my sketch map of the area.  Using the alleyways it would be possible to move Florence’s body from behind her home to the wasteland where it was found with only brief intervals in danger of observation…  most notably crossing Fleetwood Road.  The body was found opposite Flakefleet Avenue which suggests this was the route.

The most striking thing is that the crime is never solved.  How can this be?   If we discount the bush-haired “stranger,” or  if we include him, how many suspects can there be in a town like Fleetwood?  The more obvious suspects are “bigger boys.”  How many of them could have been on the streets in that area and how difficult would it be to account for them?

This is all so long ago that there are  very few people who remember the incident and what follows is speculative.

The Police either knew who did it or did not try very hard to find out.  Maybe  they wanted to spare Mr Port’s feelings and that a good number of local boys could have been involved in some way including a number with parents who were influential. At that time people would take a more condemnatory attitude towards Florence Port than now.

There is probably not much significance in the partly digested pie or hotpot.  Maybe a child had shared a meal from a fish and chip shop.

Suppose the Police decided that it was in the best interests of the people of Fleetwood that the murder of Florence Port remain unsolved.  What comfort would it be to Mr Port to learn that his daughter was involved in sexual activity and died as a consequence.  What would be the point of involving a young lad in a murder charge when the crime was  more likely accidental?   It is unlikely that a young lad would be convicted on the evidence because Florence’s congenital problems played a part in her death.

It is easy to judge, speculation may be wrong.  What is true is that Florence was a happy little girl and enjoyed her life and her death is a cause of sorrow to her father and her sisters and brothers.